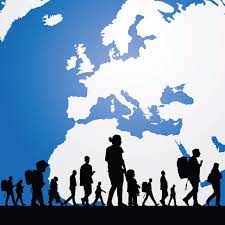 › Latest News › The hospitality of welcome: the benefits of migration.

The BBC programme ‘Who Do You Think You Are?’ is one of my all-time personal favourites. For those of you who do not know it – it is a TV series now into its 18th season which in each episode shows a celebrity tracing their family tree. Who would have thought genealogy would have become such a hit? Indeed, away back in the first series the last ten minutes of each episode featured a genealogical researcher giving tips on tracing a family tree. I’ve always been fascinated by my family history not least as my late great aunt traced our family back for generations when she was in her nineties well before the era of internet search. The fascination is not because I think there are great swashbuckling heroes, princes or bishops to discover – very much a Scottish crofting family for generations – but because a sense of who you are and where you have come from has, for me at least, been a critical part of self-identity.

My interest in genealogy has also increased in me the awareness that countless generations of my family have been people who – largely because of poverty – have had to uproot themselves from the familiar, have had to leave the known and with real courage and self-sacrifice have had to move and start a new life in a new place amongst strangers. I am unashamedly the child of generations of migrants. And if you look at the demography of Scotland so are most of us – it’s just that in our increasingly static and settled lives we have lost the memory chord to our migrant past.

Why is this important? Well in one sense I am reflecting on migration because today is United Nations Migrants Day. It is a day whose theme this year is about ‘harnessing the potential of human mobility’ which highlights for us all the astonishing number of people who are migrants across the world, but more important than the numbers is the amazing contribution that migrants make to the societies in which they settle. It is hard to fathom that in 2020 – a year of real chaos and turmoil – that around 281 million people were designated as international migrants – nearly 3.6 per cent of the global population.

In the last year I have spoken at many virtual events and in meetings about the contribution and added value which folks who have come to Scotland to work in social care have brought to our sector and most importantly to our communities. They have brought knowledge and skills, insights and creativity, innovation and compassion. They have enriched our care and brought quality to our organisations.

But being a migrant has never been and is not easy. It requires a strength of character and resolve which few of us can show; it necessitates a flexibility and openness, a willingness to be changed and challenged.

Alongside these meetings I have taken part in numerous discussions with politicians and ministers, activists and campaigners around the effect that the new United Kingdom Government immigration restrictions have been having on social care over the last year. I wrote in a previous blog around this a couple of months ago. Sadly, with the arrival of Omicron the glaring gaps in our workforce capability and resilience are being shown for what they are. The post-Brexit immigration policy has a lot to answer for but part of that is the critical shortage of staff in social care which has seriously weakened the sector’s ability to meet the challenges of Omicron. It is not an exaggeration to say that the policies of the United Kingdom Government especially initiated during a global pandemic have seriously endangered lives and made us less likely to keep people safe.

In the light of all that reality it was therefore really positive to read this week of the recommendations of the UK Government’s own specialist Advisory team, the Migration Advisory Committee. In an extensive report published on Wednesday they are recommending to the Home Office that there are urgent changes made to the new immigration system to meet the needs of the social care sector. The Committee stated:

“Given the severe and increasing difficulties faced by the care sector, the report brings forward preliminary findings on adult social care. The MAC recommends the government make care workers immediately eligible for the health and care worker visa and place the occupation on the shortage occupation list.”

This is what we have been calling for throughout the last year. The experts have heard the pleas to support a care sector not least in Scotland which needs to continually attract new people into the care sector. And lest anyone retort this will pull wages down – there is absolutely no evidence of this in recent times in Scotland where frontline care salaries continue to rise.

Now we can only wait to see if political leaders at Westminster will accept data and fact before rhetoric and mantra. I earnestly hope the Home Secretary will accept the expert advice of her own Committee, if she fails to then 2022 will continue to see the decline of our communities and a reduction in our ability to deliver basic social care to meet citizen needs. The actions of the UK Government have already endangered the care sector they now have the ability and evidence to make change or continue to cause harm.

So as the nights start to draw in towards December 21st I hope as we turn into lengthening days of light in the next few weeks that we will see a light of realisation dawning in the Home Office. I hope we can begin to see and hear in that place less of the toxic intolerance of the migrant and more of the true character of Scotland and its people, of openness and welcome, valuing and affirmation. Migrants are a gift to our communities, and I say that as the son of the son of the son of the son of the son… of a migrant, and as each hand touches the next in an embrace of hands back into the mists of time … that is a family tree which really does tell me ‘Who I think I am’.

And on a day thinking of all who are migrants I’ll close with the beautiful poetry of Lory Bedikian. It is timeless in its rhythm of migrant truth and landless in the horizon of its insight.

Prayer for My Immigrant Relatives

While they wait in long lines, legs shifting,
fingers growing tired of holding handrails,
pages of paperwork, give them patience.
Help them to recall the cobalt Mediterranean
or the green valleys full of vineyards and sheep.
When peoples’ words resemble the buzz
of beehives, help them to hear the music
of home, sung from balconies overflowing
with woven rugs and bundled vegetables.
At night, when the worry beads are held
in one palm and a cigarette lit in the other,
give them the memory of their first step
onto solid land, after much ocean, air and clouds,
remind them of the phone call back home saying,
We arrived. Yes, thank God we made it, we are here.

Copyright © 2011 Lory Bedikian. This poem originally appeared in The Book of Lamenting (Anhinga Press, 2011) and is taken from https://poets.org/poem/prayer-my-immigrant-relatives .