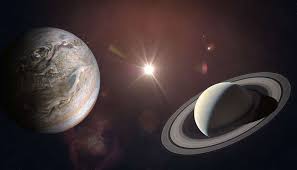 On Monday December 21st  and for the next couple of days until Christmas Eve in the early evenings along with many others I will be looking up into the sky hoping it will be cloudless as I attempt to see evidence of one of the celestial rarities. I will be searching for what is called the Great Conjunction which is the coming together of Saturn and Jupiter in their closest alignment since 1226.  The event happens  when the solar system’s two largest planets appear side by side in a “great conjunction” above the horizon soon after sunset.

It has been reported that the Vatican believes that the original Star of Bethlehem may have been such a Great Conjunction. Be that as it is may at the end of the coming week, we will be celebrating the Christian festival of Christmas. It will be a time of especial importance to those of Christian belief but even to the millions of others who are not Christian, Christmas Day has a significance way beyond its 24 hours. This year we will be spending the day in very different ways to the norm. This will be exceptionally hard for many not least those who have been separated from their loved ones for too long in care homes and in community.

Twenty-nine years ago, I was privileged to spend some time in Bethlehem and in Israel-Palestine in general. Bethlehem is a town of modernity etched with memory; its significance as a place of new beginning and possibility is worn wisely upon its ancient shoulders. It was also beyond the romanticism of tourist trinkets and pilgrim souvenirs, a place of grinding poverty, inequality and discrimination. But one of my lasting memories of my time there was that it and its predominantly Palestinian inhabitants were singularly proud of belonging to a place of becoming, of being citizens in the birthplace of the Christ. I remember talking to someone there and quizzing them about what was special about the place given that there was huge historical and archaeological debate and scepticism about most the so-called ‘holy sites.’ The response was simple, ‘This is a place where the ordinary is turned into the extra-ordinary.’

There is indeed a truth in that analysis. Throughout the history of both the cultural and theological depiction of the birth of the Christ, there is an inescapable simplicity of interpretation, which would contend that this is all about the ordinary becoming extraordinary. In a turning of the tables of expectation Christians believe that divine power and omnipotence incarnates itself into the fragility of flesh and blood. The power of the universe and creation is imaged in the vulnerability of a new-born, defenceless child. The assertion is that the extraordinariness of divinity becomes the ordinariness of humanity, and by this the Christian story asks for the elevation of humanity in all its reality, vulnerability and pain.

So, next week when I look to the skies, I might not be searching for a Star of Bethlehem, and given the Scottish weather I might not even see a Great Conjunction, but I will spend time reflecting on the truth that it is in the ordinariness of our living that we are surprised by the extraordinary, that wonder and awe is enshrined in our humanity lived at its best.

And as I reflect, I will know deep down that the year that has passed has evidenced that truth. We looked out from lockdown and watched folks going about their daily work despite carrying the burden of fear. They were ‘ordinary’ people doing ‘ordinary’ jobs which on any other day and at any time would have gone unnoticed, unheralded and poorly rewarded. They were the home carers, the cleaners and supermarket staff, the nurses and bus drivers, the care home staff and hospital porters. They were evidence of the ordinary being turned extra-ordinary.

As most of us sat cocooned in safety away from the virus, we witnessed communities coming together in acts of generosity and kindness, finding solidarity in the midst of suffering, and supporting one another to be our better selves. Whilst the air may have been tangible with absence and isolation, there was also as sense of mutuality and concern, which went way beyond the clapping of a Thursday night or the platitudes of politicians.

Christmas is about turning the tables of expectation upside down. The coming days will undoubtedly be filled with concern and anxiety for many, regret and loneliness for yet more. They will be days of memory when the absence of a loved one who has died will ache particularly hard. There will be moments when Christmas days of the past, togetherness and laughter will fill memory and bring tears. But I hope it will also be a time when we think of those who have given to others in so many ways in the months that have passed. They have given to each of us the priceless gift of compassion and community. This may be a Christmas less ordinary but it is also one whose strangeness should give us space to reflect and remember, to be thankful for and to commit to being different and better.

One of the most famous poems of this season is the ‘Journey of the Magi’ by T.S.Eliot. Written nearly a 100 years ago, and now most definitely of its time, it describes the experience of the Magi, the ‘wise men’ of our childhood nativity stories who followed a celestial happening to arrive at the birth of a baby. In one glorious phrase Eliot describes them changed by the experience of following that star to see birth contradict expectation. The experience transformed them forever so that they could not go home to the routine predictability of their past life. ‘We returned to our places, these Kingdoms, But no longer at ease here, in the old dispensation,’

I hope that whatever we do on Christmas Day and whoever we are with, that we might look to the skies and spend some time thinking of those whose ordinariness of living and loving in the last nine months has the potential to transform us all, and as we do to remember those for whom this season is one of sadness and absence, and who this year will be more alone than silence. I hope we will give space and time to all those unnoticed and unloved. I hope that we can all have the courage to find a determination to learn from the pain of the last few months and commit not to return to the way things have been or still are, but to walk together into the creation of a new, more human way of being. I hope that we will carry with us into that future the gift of ordinary loving made extraordinary.

Happy Christmas  when it comes.

“A cold coming we had of it,
Just the worst time of the year
For a journey, and such a long journey:
The ways deep and the weather sharp,
The very dead of winter.”
And the camels galled, sore-footed, refractory,
Lying down in the melting snow.
There were times we regretted
The summer palaces on slopes, the terraces,
And the silken girls bringing sherbet.
Then the camel men cursing and grumbling
And running away, and wanting their liquor and women,
And the night-fires going out, and the lack of shelters,
And the cities hostile and the towns unfriendly
And the villages dirty and charging high prices:
A hard time we had of it.
At the end we preferred to travel all night,
Sleeping in snatches,
With the voices singing in our ears, saying
That this was all folly.

Then at dawn we came down to a temperate valley,
Wet, below the snow line, smelling of vegetation;
With a running stream and a water-mill beating the darkness,
And three trees on the low sky,
And an old white horse galloped away in the meadow.
Then we came to a tavern with vine-leaves over the lintel,
Six hands at an open door dicing for pieces of silver,
And feet kicking the empty wine-skins.
But there was no information, and so we continued
And arriving at evening, not a moment too soon
Finding the place; it was (you may say) satisfactory.

All this was a long time ago, I remember,
And I would do it again, but set down
This set down
This: were we led all that way for
Birth or Death? There was a birth, certainly,
We had evidence and no doubt. I had seen birth and death,
But had thought they were different; this Birth was
Hard and bitter agony for us, like Death, our death.
We returned to our places, these Kingdoms,
But no longer at ease here, in the old dispensation,
With an alien people clutching their gods.
I should be glad of another death.”